The City contracts for building, engineering, electrical and plumbing plan review, and inspections with outside agencies.  In addition to issuing building permits, the community development department is also responsible for strategic and long-range planning, economic and business development, and general community development projects.  It provides staff support to the Planning Commission, the Landmarks Commission, and the Board of Zoning Appeals.

The City originally approved the establishment of the Vintage Club Planned Development in 2006 for approximately 68 acres along Montgomery Road north of I-275 to create a mixed-use village with residential and commercial uses.  The updated General Development Plan reflects months of work by the developer to meet the expectations of the City and the residents of the Vintage Club while working with the current market conditions.  In many ways, the development is very similar to the original proposal in 2006, and the final product will be an attractive mixed-use development with retail, office, restaurants, and condominiums that will complement the existing homes at the Vintage Club and The Christ Hospital Health Network medical office building.

The Planning Commission approved Phase 10 of the Vintage Club in October 2019, including building architecture and design of Building C.  A building permit has been secured for this building, and construction was scheduled to begin in the spring of 2020; however, the COVID-19 pandemic delayed construction.  The building is anticipated to start construction in the spring of 2022.  City staff will continue to work with the developer in 2022 to bring this project to fruition. 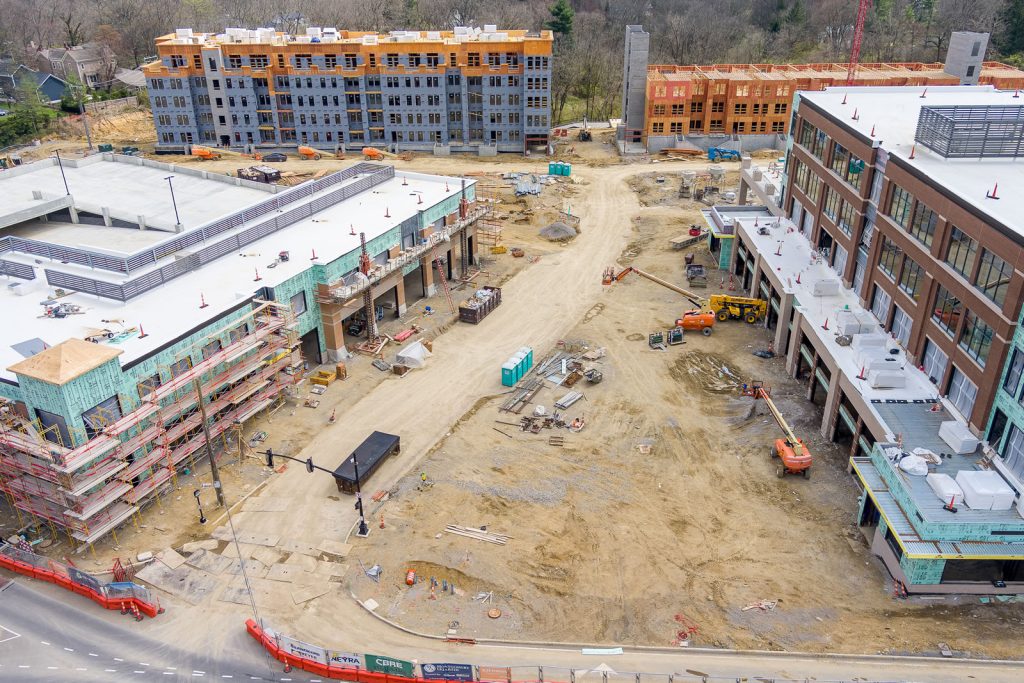 On the city's southern end, work continued on the Montgomery Quarter project.  The Montgomery Quarter is a premier mixed-use development and includes a boutique hotel, meeting and event space, and amenities such as a bar, spa, and retro game room and lounge.  The development will also include about 38,000 square feet of retail and restaurant space, 260,000 square feet of office space, 148 luxury apartments, and 48 condominiums.  Multiple parking garages within the development provide approximately 940 parking spaces along with on-street parking.  Private parking garages will serve the new apartments and condominiums.

Initial site work has been completed, and the construction of two parking garages in Phase 1 is substantially complete.  The first office building is underway and scheduled to be completed by the spring of 2022.  Fifth Third Private Bank, a division of downtown Cincinnati-based Fifth Third Bank (Nasdaq: FITB), has signed a lease for 15,000 square feet, covering the entire top floor of the three-story first office building that will be built in Montgomery Quarter. This lease helps kick off the development that has been in the works for six years.

The first two restaurant tenants have also been announced as BruBurger and Livery, and construction has begun on the interior of these two new spaces.  The retail building at 9340 Montgomery Road is also under construction and is scheduled to be completed before the end of the year.  The luxury apartments include two ‘flats’ buildings and two townhome-style buildings.  Construction of the two ‘flats’ building has begun with an estimated completion of the first quarter of 2023.

The development team of Brandicorp, Neyer Properties, and Jeffery R. Anderson Real Estate, Inc. has secured The Tapestry by Hilton brand for the boutique hotel planned for Montgomery Quarter.  The boutique hotel will feature multiple event spaces, a uniquely designed lobby bar, and 118 luxury guest rooms.  In coordination with Hilton, the development team will design and curate the guest experience to highlight the uniqueness and energy of the Montgomery area.  With a construction start date in late 2022 and an opening planned for May 2024, The Tapestry by Hilton hotel will set the standard for approachable luxury in the eastern suburbs of Cincinnati. 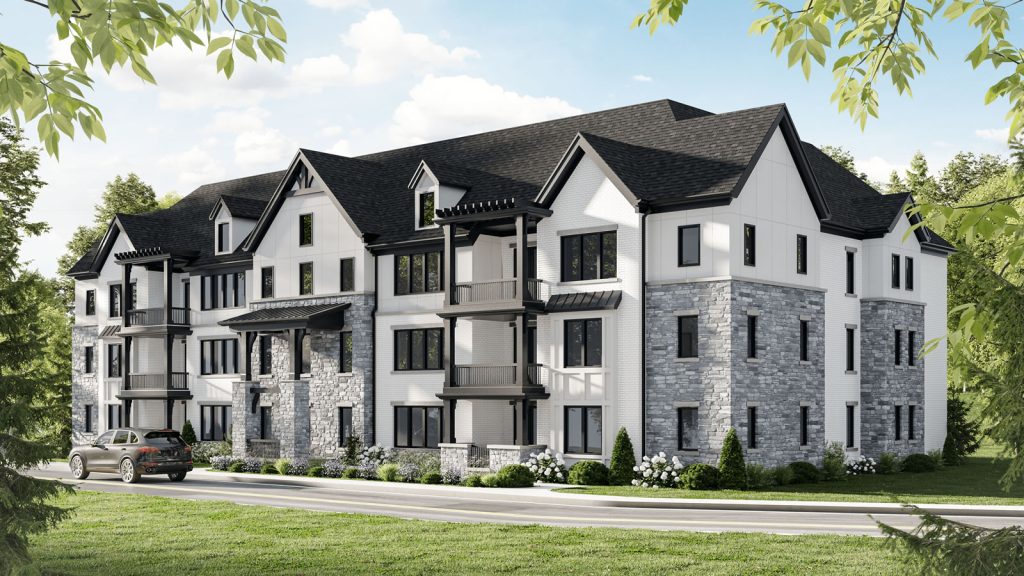 The Planning Commission approved a Final Development Site Plan for constructing three ‘flats’ buildings for Twin Lakes at the corner of Montgomery Road and Schoolhouse Lane.  The project will consist of thirty independent living units in three buildings with a community room and outdoor amenities.  The plans also call for adding a sidewalk along Montgomery Road and well-designed new buildings with landscaping along Montgomery Road and throughout the site.  Construction is slated to begin in the Spring.  This project will be complementary to the existing independent living homes and allow Twin Lakes to meet the needs of its residents today and for years to come.

Construction of a two-story addition of approximately 16,500 square feet over the existing ‘vendor lot’ is substantially complete.  The addition will provide space for GI/Endoscopy on the lower level and Cardiology/Cath labs on the first level.  The plan also calls for the consolidation of Outpatient GI/Endoscopy Services in the building located at 10494 Montgomery Road.

The Planning Commission approved a Final Development Site Plan to construct an additional story onto the 300 Tower of the main hospital in March of 2022.  The additional floor is approximately 33,000 square feet and will provide 44 private patient rooms that are designed to meet updated standards for patient and family accommodations related to Oncology Med-Surgical Care.  The project will also update the exterior of the hospital tower with modernized metal panels installed from the 5th to 8th floor.  Construction is slated to begin in late spring 2022.

The Planning Commission approved a Final Development Site Plan in October of 2018 to allow the Robert Lucke Group to construct 12 new villa homes along Montgomery Road north of the Safety Center.  The existing single-family homes have been demolished to make way for The Villas of Montgomery, which will include six new single-family attached dwellings and open space.  Drivers may access this latest development by a private drive which will be right in/right out.  The plans call for adding a sidewalk along Montgomery Road and well-designed new buildings with landscaping along Montgomery Road and throughout the site.  Three of the six buildings have been constructed, and five units have been sold to private individuals.

Work continued on the Orchard Trail subdivision, a 29-lot, single-family, detached subdivision on the site of the former Montgomery Swim and Tennis Club on Orchard Club Drive.  Camden Homes received approval for the development; however, Daley Design Build took over the project in 2018.  Following the ownership transition, Daley Design Build sold multiple lots to several different builders.  This is a significant change in the development, as it was originally intended for all the houses to be built by the same builder.  Five building permits were issued for new homes in the subdivision in 2021.  Additionally, two homes were sold in 2021 for $765,000 and $799,000.  The new subdivision features high-end, empty-nester type housing with a pocket park and a walking trail.

Sycamore Community Schools is completing a facilities master plan, which involves renovations and/or new construction on many of the campuses throughout the district.  Within the City of Montgomery, an addition to E.H. Green Intermediate School at 5200 Aldine Drive is under construction.  Construction of a new Junior High at 5757 Cooper Road is underway behind the existing school, which allows students to continue to attend the junior high during construction.  The plan also calls for the relocation of the bus depot and separation of bus and car traffic, which should help alleviate traffic congestion during pick-up and drop-off on Cooper Road.

The Planning Commission approved a Final Development Site Plan to allow for the construction of a new stadium for Sycamore High School at 7400 Cornell Road.  The new stadium is designed for approximately 3,000 spectators, with construction anticipated to begin in the spring of 2022.  The plan also calls for a new entrance to the school across from Valleystream Drive with a dedicated right-turn lane to the school, which along with other improvements in circulation on the campus, should alleviate traffic congestion during pick-up and drop-off on Cornell Road.  The updates to the schools and the new Sycamore Stadium will allow the District to provide first-class facilities for the student-athletes and meet the needs of their students today and for years to come.

The Joseph Auto Dealership completed work to expand parking and inventory space for the Audi Connection on the former Star One/Rudino’s property located at 9722 Montgomery Road in the Winter of 2021.  The Joseph Auto Dealership is proposing to expand parking and inventory space for Columbia Chevrolet and construct a pre-owned vehicle sales building on the former Steak ‘n Shake site at 9770 Montgomery Road.  The former Steak ‘n Shake building has been demolished, and work on the parking lot expansion is expected to begin in the Spring of 2022, with a pre-owned vehicle building to be constructed.

There were other positive developments in the city during 2021:

The total value of improvements for new commercial developments, expansion, and additions was significantly higher in 2021 at approximately $125 million versus $30 million in 2020.

The residential sector was busy in 2021 with the building department issuing 18 permits for new homes and 66 permits for residential remodeling/room additions.  The total value of residential construction was estimated at $5.4 million versus $16 million in 2020.  The City issued 11 demolition permits in 2021, which mirrors the number of demolition permits issued in 2020.  Since 2001, there have been a total of 313 teardowns or approximately 7% of the total housing stock in the city.