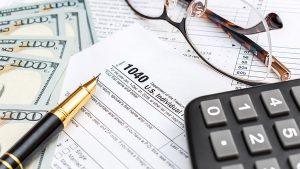 We are here to help!

The Tax Office staff is always available for questions or assistance with preparing Montgomery tax returns; however, we do have some alternative options to in-person visits. If you would like to have our staff prepare your return, please submit documents in advance through the Secure Email portal. Once your return is finished, the Tax Office staff will contact you. Questions? Call us at 513-792-8333 or email [email protected]. Taxes can be paid either with a checking account or credit card by contacting the Tax office directly.

Not sure if you are in Montgomery?

Interest shall be imposed at the rate calculated based on the federal short-term rate, rounded to the nearest whole number percent, plus five percent (5%) per annum on all unpaid income tax, unpaid estimated income tax and unpaid withholding tax. Interest shall be charged per month, or fraction of a month.

With respect to unpaid income tax and unpaid estimated income tax, a penalty equal to fifteen percent (15%) of the amount not timely paid shall be imposed.

With respect to any unpaid withholding tax, a penalty equal to fifty percent (50%) of the amount not timely paid shall be imposed.

The Tax Office shall impose a monthly penalty of twenty-five dollars ($25.00) for failure to timely file a return, regardless of the liability. The penalty shall be charged for each month, or fraction thereof, not to exceed a total of one hundred fifty dollars ($150.00).

The interest rates to be applied to all unpaid income and withholding tax balances.  These rates are being published in accordance with Ohio Revised Code 718.27(F) which states that “By the thirty-first day of October of each year the municipal corporation shall publish the rate described in division (A) of this section applies to the next succeeding calendar year”.

“Taxpayers’ Rights and Responsibilities” means the rights provided to taxpayers in Sections 718.11, 718.12, 718.19, 718.23, 718.36, 718.37, 718.38, 5717.011, and 5717.03 of the Ohio Revised Code and any corresponding ordinances of the Municipality, and the responsibilities of taxpayers to file, report, withhold, remit and pay municipal income tax and otherwise comply with Chapter 718 of the Ohio Revised Code, resolutions, ordinances, rules and regulations adopted by a municipal corporation for the imposition and administration of a municipal income tax.

These rights and responsibilities include, but are not limited to, the following:

How do I file my Montgomery taxes?

Please mail or drop off your completed Montgomery Tax form, W2, and other supporting documents to:

Does the City of Montgomery give credit for taxes paid to other municipalities?

The City of Montgomery grants credit up to 1% of taxed wages for taxes paid to other municipalities. (See Line-by-line instructions for further information)

What is the filing deadline and how may I receive an extension?

What is the tax rate for the City of Montgomery?

The City of Montgomery has a 1% Income Tax which applies to all who live, work or operate a business in Montgomery.